Several policy-related risks loom in September and October that may lead to an increase in market volatility. The debt ceiling needs to be raised (likely by mid-October), the government needs to be funded to avoid a shutdown by the end of September, and the Democrats are trying to pass two major spending bills and will need to provide greater clarity on tax increases over the next several weeks. We believe the greatest risks come from the debt ceiling and taxes, but expect neither to have much near-term impact on the general trajectory of the bull market.

There’s always something going on in Washington, but with summer behind us, policy debates are heating up with an unusual number of high-profile policy issues looming for Congress and President Joe Biden in September and October. Those include the debt ceiling; the fate of the bipartisan infrastructure bill; clarity and potential progress on the much larger American Families Plan (AFP) spending package emphasizing Democratic priorities (also known as the human infrastructure bill); and, not to be forgotten, simply funding the government. These very well could be the peak policy months of President Biden’s first term, akin to the months leading up to the passage of the Affordable Care Act under President Barack Obama and the Tax Cuts and Jobs Act under President Donald Trump. This week we break down what market participants should be watching, possible sources of risk, and our expectations.

September and October aren’t important policy months simply because there’s a lot going on—looming deadlines are forcing the action. Keep in mind that Congress is notorious for not acting until the last possible moment and even pushing back deadlines whenever it can, as different members of Congress try to squeeze one more concession out of negotiations. This will create a lot of noise and increased uncertainty, but is unfortunately the norm for how Congress operates. While every maneuver may be of genuine political interest, as an investor, it’s important not to get too caught up in Congressional drama. Here’s a quick overview of where we are right now and what may be coming next:

With deadlines forcing the action, what will market participants be watching? Primarily the debt ceiling and taxes. The two present contrasting risk profiles. Congress is extremely unlikely to let the U.S. default on its debt since it would likely have significant negative consequences for markets and the economy. On the other hand, Congress is very likely to raise taxes, driven by (slim) Democratic majorities in both chambers. But, based on history the immediate market impact is likely to be negligible, with the biggest risk around the hit to corporate earnings due to a higher corporate tax rate. On the other hand, taxes help contain deficits—it’s how you pay for what you spend, and for deficit hawks it’s preferable to borrowing. Best to spend wisely and tax lightly, but no president since 1960 has been able to achieve that except Bill Clinton. In the absence of that approach, paying for at last some of what you spend may be preferable to pushing the national debt even higher.

The debt ceiling is the maximum amount of debt that the Treasury Department can issue. The Treasury uses the money it borrows to pay its obligations. The amount is set through Congress and has been regularly increased as needed over the years. The consequences of not raising the debt ceiling are far from trivial. Not only would the U.S. government not be able to cover its expenses, it would also default on its debt—which could send shockwaves throughout the financial system.

Through a bipartisan budget act in 2019, Congress suspended the debt ceiling through July 31, 2021, which allowed the government unfettered access to capital markets. As seen on the chart, when the suspension was enacted, total debt outstanding was $22 trillion—but current debt levels have risen to $28.4 trillion, which is the new debt ceiling level [Figure 1]. The debt ceiling will need to be raised soon or the U.S. Treasury will likely run out of its “extraordinary measures” to fund government activities. Treasury Secretary Janet Yellen recently said this would likely occur in October. 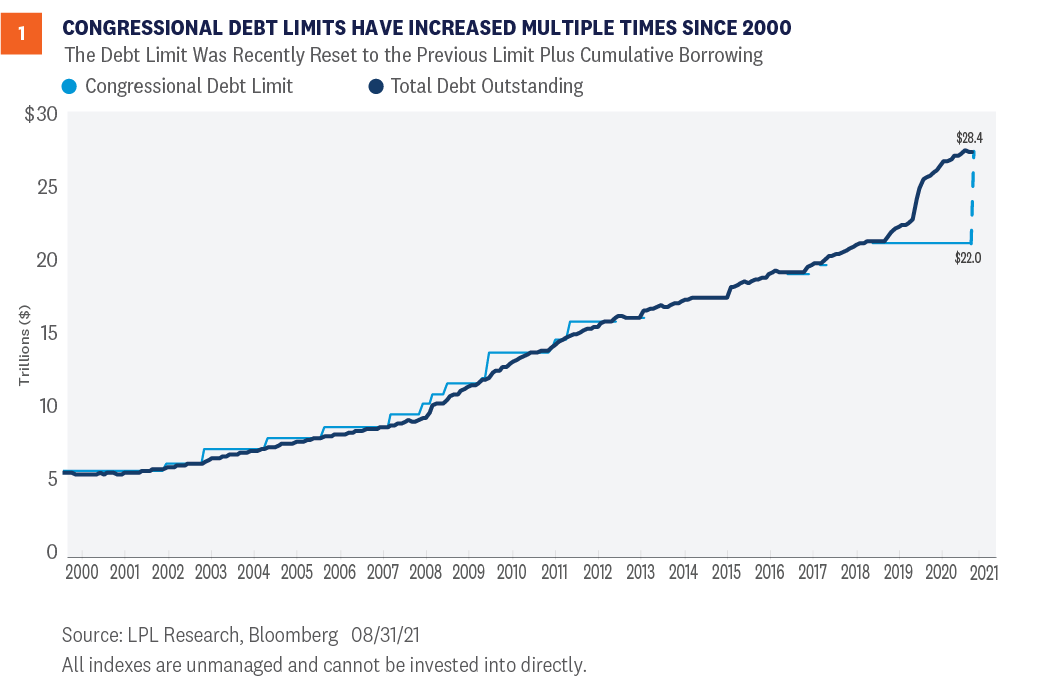 If the debt ceiling isn’t resolved, the U.S. government would technically default on its contractual obligations. Bond markets have been relatively sanguine about the prospects of a U.S. default, but we are starting to see yields move higher on Treasury bills maturing in late October and early November. Unless resolved, as we get into October, we could see short maturity Treasury yields move higher still as the prospects of non-repayment, however slight, get priced into the market. U.S. bond market investors have taken for granted the government’s ability and willingness to pay its debt. While its ability to repay its obligations is not in question, playing politics with the debt ceiling complicates the picture of the country’s willingness to pay its debts—which is part of why the credit rating on U.S. debt was lowered by Standard & Poor’s in 2011. While we think Congress is extremely likely to act in time and either raise or suspend the debt ceiling, these games of political chicken can introduce volatility to markets in the meantime.

Greater Clarity on Taxes is Coming

There are few near-term market risks from the planned spending in the AFP, although there may be longer-term risks due to rising debt and higher structural tax levels. But markets tend to like stimulus. There may be some market risks, however, around how the spending is paid for, which will be a combination of borrowing and taxes. Raising taxes has never been politically popular, and so far, Democrats have been somewhat vague about where the tax revenue would come from. But if Democrats are going to try to pass the infrastructure and AFP bills in September or October, they need to begin getting into specifics on taxes in the next week.

Individual taxes on upper-income individuals are also likely to go higher as the Democrats attempt to raise more than $1 trillion in tax revenue to fund a portion of their agenda. The Biden administration has proposed taking the top tax rate on ordinary income to 39.6% from 37%, and capital gains and taxes on those who earn more than $1 million to a maximum of 43.4% from the current 23.8%. While a capital gains tax increase on wealthy individuals is likely, we would expect an eventual compromise to land at a rate near 28%, which would put the total effective rate—including the 3.8% Affordable Care Act tax—at 31.8%.

It’s logical to think impending tax increases could cause market volatility at some point as the path to those tax hikes becomes clearer. So far, stock prices have seemingly ignored this risk. We offer two primary reasons for that. First, these tax increases have been widely expected for quite some time. Remember, President Biden campaigned on them. And second, as we discussed in our Midyear Outlook 2021 publication, markets have generally held up well after past tax increases, including corporate and individual (though the sample size is small). Those who do not expect these tax hikes to be passed may also be providing some support for stocks. It won’t be easy to get moderate and progressive Democrats on the same page to pass such significant legislation with razor-thin majorities in the House and Senate.

Whether the bi-partisan infrastructure bill and the AFP are passed as two bills or one (which is still a possibility), we think we are likely to see a total package of $2-2.5 trillion in new spending, funded by a combination of debt and $1-1.5 trillion in new taxes over approximately 10 years. We may see some pick-up in policy-related volatility as the legislative process moves forward around the two spending bills, funding the government, and the debt ceiling—but we believe most of the impact has been largely priced in. Depending on where corporate taxes end up, we could see some energy come out of the bull market, but it doesn’t lead to a substantive change in our outlook. For those who follow politics closely, the next several weeks will probably garner heavy interest. For market participants, though, we believe the priority will be to tune out the noise and not panic over deadline drama. The fundamental backdrop for the economy remains strong and corporate America continues to demonstrate extraordinary resiliency—and ultimately that’s what drives the stock market.

This material is for general information only and is not intended to provide specific advice or recommendations for any individual. There is no assurance that the views or strategies discussed are suitable for all investors or will yield positive outcomes. Investing involves risks including possible loss of principal. Any economic forecasts set forth may not develop as predicted and are subject to change.

References to markets, asset classes, and sectors are generally regarding the corresponding market index. Indexes are unmanaged statistical composites and cannot be invested into directly. Index performance is not indicative of the performance of any investment and do not reflect fees, expenses, or sales charges. All performance referenced is historical and is no guarantee of future results.

Any company names noted herein are for educational purposes only and not an indication of trading intent or a solicitation of their products or services. LPL Financial doesn’t provide research on individual equities.

All information is believed to be from reliable sources; however, LPL Financial makes no representation as to its completeness or accuracy.

The Standard & Poor’s 500 Index (S&P500) is a capitalization-weighted index of 500 stocks designed to measure performance of the broad domestic economy through changes in the aggregate market value of 500 stocks representing all major industries.

The PE ratio (price-to-earnings ratio) is a measure of the price paid for a share relative to the annual net income or profit earned by the firm per share. It is a financial ratio used for valuation: a higher PE ratio means that investors are paying more for each unit of net income, so the stock is more expensive compared to one with lower PE ratio.

Earnings per share (EPS) is the portion of a company’s profit allocated to each outstanding share of common stock. EPS serves as an indicator of a company’s profitability. Earnings per share is generally considered to be the single most important variable in determining a share’s price. It is also a major component used to calculate the price-to-earnings valuation ratio.

All index data from FactSet.

This research material has been prepared by LPL Financial LLC.

No comments to show.